Note: This post is written in reverse chronological order, please read from bottom of page. 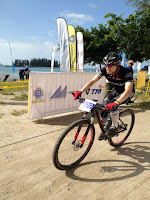 Ahh, the last race day. My body was a bit weary, bike a little beaten but spirits were high. It was a simple 1.6 km circuit around the beach area and the carnival atmosphere was an apt finale to what had been an interesting stage race.

By this stage, my legs were heavy and I just could not floor the pedal. So I just soaked in the fun and cruised till the end. The UCI officials were kind enough to allow us to continue racing even though we were lapped.

I finished in 10th place and my final result was 9th position in the Men's Masters General Classification.

More coverage and results of the professional riders at Cycling News.

For me, the LIMBC 2012 has been a fantastic outing. In spite of the tough conditions, I finished unscathed with just some scratches and insects and leach bites. It was nice to get up close with the world-class racers. Their fitness and power were so amazing.

Yes, the some of the trails were questionable and the organization could have been tighter. But my overall experience was great - the warm Malaysian hospitality, the organizers who went out of their way to assist us and best of all were the interesting mountain biking folks and making new friends. 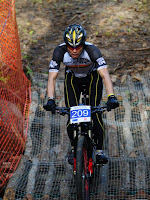 Today's race was the best and most enjoyable stage for me. The climbs on tarmac and dirt were steep and tough, but we were rewarded with fast technical downhills and classic single tracks with just a few puddles in between.

Most of the trails were in shaded primary forest with the familiar scent of fresh waterfall and moss. The race format was 4 laps within the stipulated 75 minutes.

But my race ended too soon when the Italian race leader lapped many of us on the 3rd and so I had to be pulled out at the finish line. I actually was looking forward to the 4th lap.

I finished in 8th place with 3 laps and 9th position in the Men's Masters General Classification.

The organizers took out a long hill climb and shortened the course by 4 km as it was deemed unrideable. I thought that was probably one of the best decision made so far.

Today's stage started with another big push up a hill for about 45 minutes, not as steep as previous stages but equally slippery and muddy. However, the downhills were quite nice with some flowy single tracks.

I completed the first lap in just over 2 hours and then did the 2nd lap all over again, glad that I only have to complete 2 laps. The Men's Open category had 3 laps.

By now, the S-Works hard tail has has become a bit jaded. The constant chain suck forced me to pedal on the big chain ring and I am constantly wary of prematurely wearing out the brake pads, having used up all the spares.

Also, the the bike had morphed into a rigid as the forks had seized-up.

So I had to use more body English and finesse to absorb the bumps and jumps. Nevertheless, I felt much better in today's race after the misery on Stage 2.

I finished in 9th place in 4:07:06 hours and also 9th position in the Men's Masters General Classification.

One word to describe today's race - miserable! The day started well enough, but after about the first 10 km, the nightmare started in the forest. The gradient got steeper and compounded by the rain and muddy conditions, made most of the climbs unrideable. Even the downhills were no fun because the mushy soil made traction almost non-existent.

I spent 3 out of the total 4 hours just pushing the bike, and even then my heart rate was beating at the 90% max rate as many of the gradient were 25% or more.

Then I ran out of water, but the published 32 km water point was no where to be found. I don't normally drink soft drinks, but the steamy and hot jungle got me craving for an extra-large iced Coke with a twist of lemon and sipping it from a cold bathtub.

Towards the end, I could feel my energy levels plummet and I was thirsty, hungry and angry. I have never been so happy to see the finish line, glad that the suffering was finally over.

The race finished at our new base at the beautiful Berjaya Langkawi Resort and I ended my day with a session by the wonderful physiotherapists from Charles Sturt University to sooth some of the pain away.

I finished in 12th place in 4:09:01 hours and 10th position in the Men's Masters General Classification.

The first 15 km of Stage 1 was the same route as the Jamboree. So after 800 riders on Sunday and 100 racers in the Men's and Women's Open that started before us, many of the sections were totally immersed in gooey mud. My S-Works Renegade tyres were slipping and sliding, and in some instances spinning at the climbs.

The weather was thankfully cooler today but the trails were harder than I anticipated.

There were a few long hard climbs and after the 3rd feeding zone at km 46, both my quads were cramping. So I swallowed whatever electrolyte tablets I had and that seemed to soothe the pain. 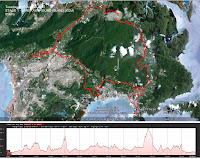 I rode the last 15 km with Lance Portman from Australia, and we had a hard and spirited time pushing and supporting each other till the end. He was kind enough not to out sprint me to the finish line, which I knew he could.

Stage 1 was a much better race for me, and I gave it all I had. My position improved and I finished in 8th place in 3:29:33 hours and 9th position in the Men's Masters General Classification.


The day started with a light drizzle and expectation of a muddy affair, and we were not to be disappointed. Registration and briefing was at the Langkawi Stadium where I purchased my temporary UCI race license for the Men's Masters category and some spare brakes pads just in case.

This year's event attracted 120 participants and being a UCI 2.2 Stage Race, attracted a fair number of professional racers.

The individual time trial commenced in the afternoon, but the start times were pushed back because of a couple of accidents. One of the local girls broke her collarbone after a bad fall on a brick path and an Italian lady dislocated a finger and took a heavy knock on her head.

I met many familiar folks at the race - Junaidi and the Singapore Team, intrepid mountain bikers Ken and Laura, Burry Stander (Team Specialized) the Absa Cape Epic 2012 champion, and last year's Langkawi winner Karl Platt (Team Bulls). Coincidentally, it was Karl Platt that presented my finisher's medal at the Cape Epic this year.

I had a lousy race today. First, I missed my designated start time and had to rush to the start line and therefore lost about 30 seconds. I was not composed and mentally ready.

Then in my flustered state, the big muddy roots almost threw me off as I hesitated to choose the best lines. In retrospect, I should have inspected and tried the course earlier in the morning.

I finished in 7:49.45 minutes, more than 2 minutes behind the Men's Masters leader and 14th position from a field of 22 racers in my category.

The Langkawi International Mountain Bike Challenge 2012 kicked off on Sunday with a 40 km Jamboree fun ride which attracted 800 riders from around the vicinity. Many of the participants from the mainland took the ferry from Perlis and Penang.

The official hotel was the Bayview Hotel where many international riders were based, including myself.

Most of the professional racers for the LIMBC main event opted to rest or had their own rides in preparation for the Prologue on Monday. I planned an easy ride and was careful not to over do it.

However, the usual adrenalin rush at the beginning took over before I settled down after overtaking some of the front pack. Thereafter, the ride was smooth with no traffic jams all the way to the finish.

The trail was a combination of tarmac and muddy and slippery single-tracks, meandering through villages and many stream crossings. The race logistics was almost perfect, with the local police and volunteers out in full force to direct the race.