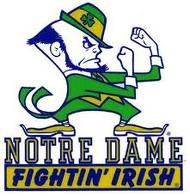 American football didn't do much for me, my favourite team sport was rugby union ... until now. I had a wonderful opportunity to join in the game and festivities in South Bend, Indiana, home to the University of Notre Dame. In one of the most anticipated games of the season, the Fighting Irish was up against their fierce rival the Michigan Wolverines.

The atmosphere was amazing, the entire town was abuzz and you could feel the excitement and anticipation in the air. All the pubs were full, and the "tailgating" before the game was really something.

The stadium was at capacity with over 80,000 fans and the marching bands from both teams were immaculate. Unfortunately, Michigan had the better game of the day and won 28 - 24.

This publication is interesting.
Cheapest Escorts In London